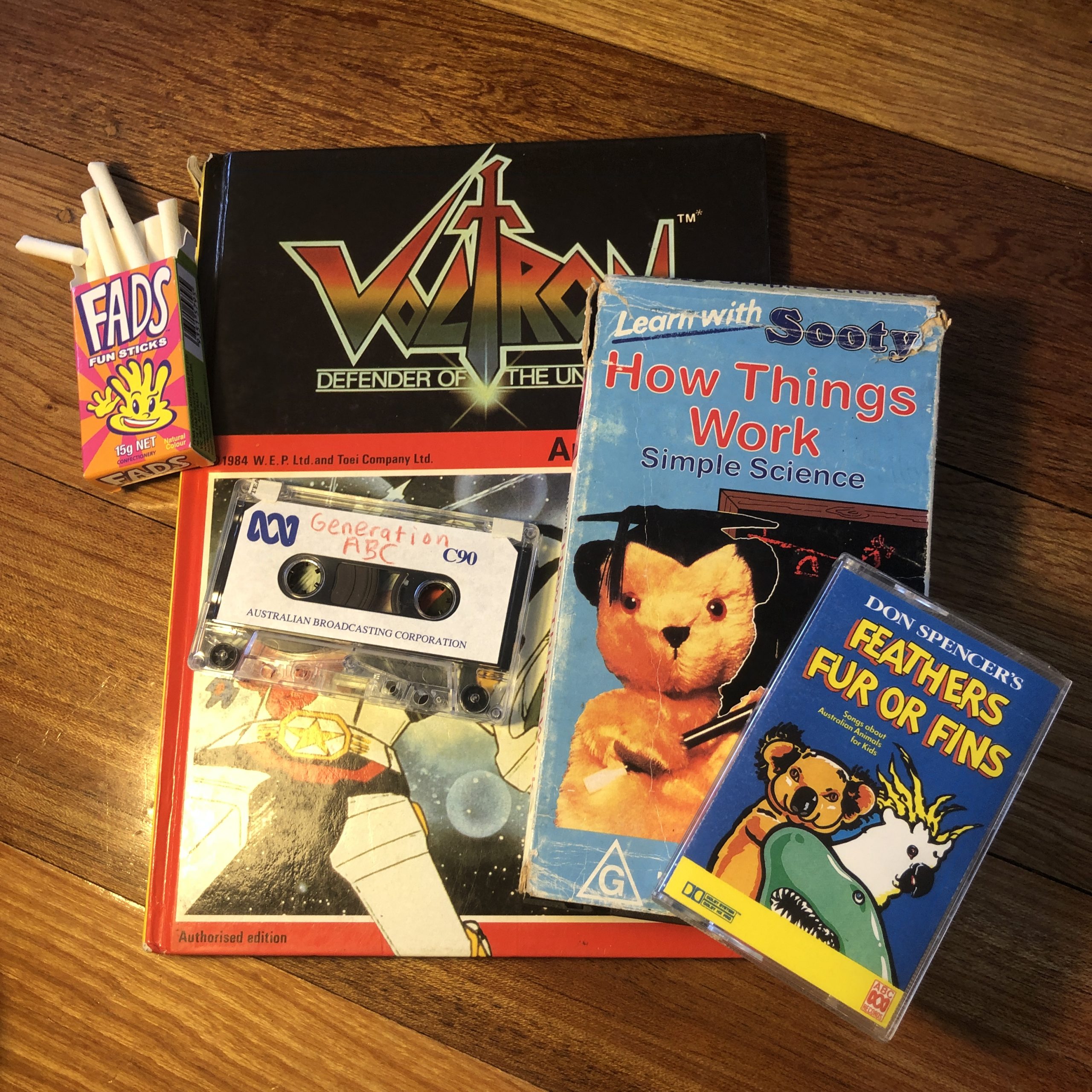 It’s 20 years since my first ‘hit’ busted out on the airwaves of Triple J. Within my six months songwriting blitz on The Morning Show – the first track to resonate with listeners was my ode to the memories of the amazing cache of programming brilliance we were adorned with as children of the 80s in Australia.

Voltron, Sooty, Ulysses 31, The Red And The Blue, Don Spencer Folk Explosion… You know what I’m talking about.

Thing is, in grade twelve the internet was still a baby, and there was no culture of running off to youtube to look up that particular show you were trying to remember. So for me it started with lunchtime conversations at Hellyer College where Ruby Taylor would go “what was that show with the gold condor?” and eight sets of eyes would light up and I would nominate myself as captain remembrance, diligently informing everyone that it was indeed ‘The Mysterious Cities Of Gold.’

I reflected on the phenomena for Frankie.

Anyway, third year uni I was a journalist for the University Of Canberra’s magazine Curio. I figured we could go to town creating a feature article rating every show I could think of that we grew up with on the ABC. In conjunction with graphic designer Anthony Calvert we launched the mythical gold condor of our imagination, memory and wonderment with a sprawling tribute. 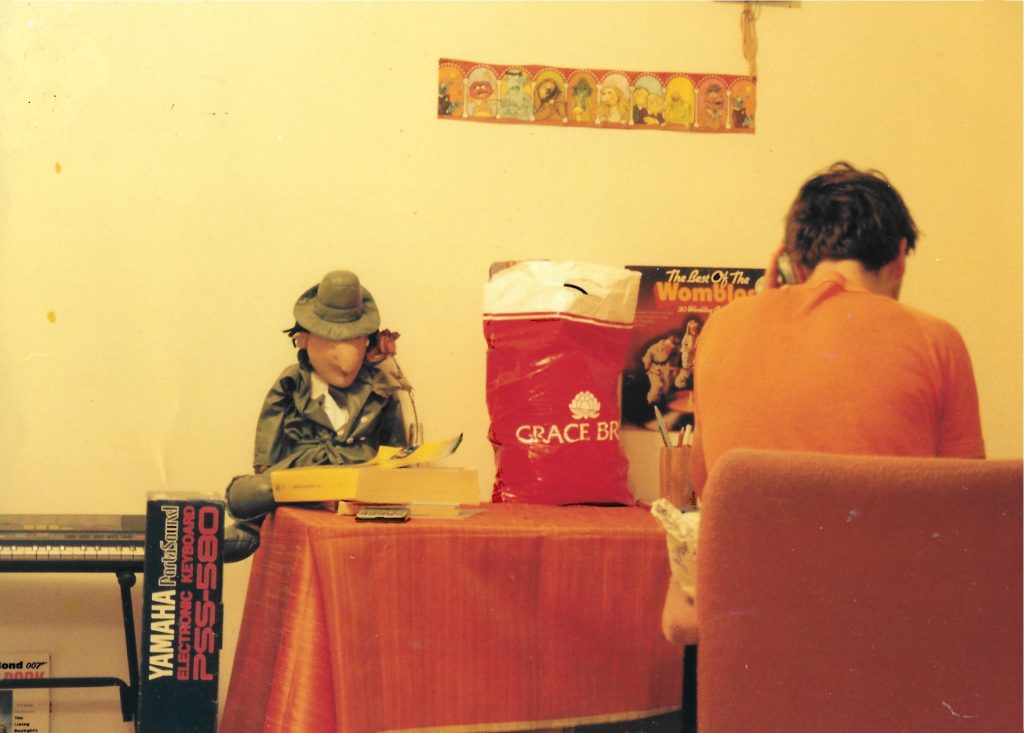 Justin ringing some 0055 number to find out the correct name of the nemesis in Astro Boy. Was it Atlas or Titus? Anyway, go-go gadget awesomeness. (I like how Penny’s computer book was basically an iphone in 1986).

As I prepare to rerelease the original Generation ABC anthem for the first time, I figured republishing the article in full would be a fitting warm up.

Bear in mind – (I hope it’s sooty) much of this hard hitting journalism was done wracking the moist spongy files of the collective consciousness of a few drunken students down at the uni bar.

I have since gone on to rewatch all of Ulysses 31 which is my absolute pick of the kids show that has dated the best. (A Japanese / French coproduction pitting Greek myths in future outer space. Basically very abstract, haunting and beautiful).

I should also mention Chocky. Like Ulysses 31, I was very young when it first aired, perhaps about five or six – and so my memories of it are especially dreamy. I recall there being something utterly transfixing about it. I rewatched all of Chocky recently and must say, it is a truly memorable experience.

(Do they make kids shows with haunting synths and overtones of schizophrenia these days? I hope so.)

Honourable mentions will always go to Voltron (when I watched the robot forming sequence on the Dreamworks reboot I teared up), How much do you think Voltron meant to me as a kid?

MY VOLTRON TRILOGY IN CRAYON AND TEXTA, 1985 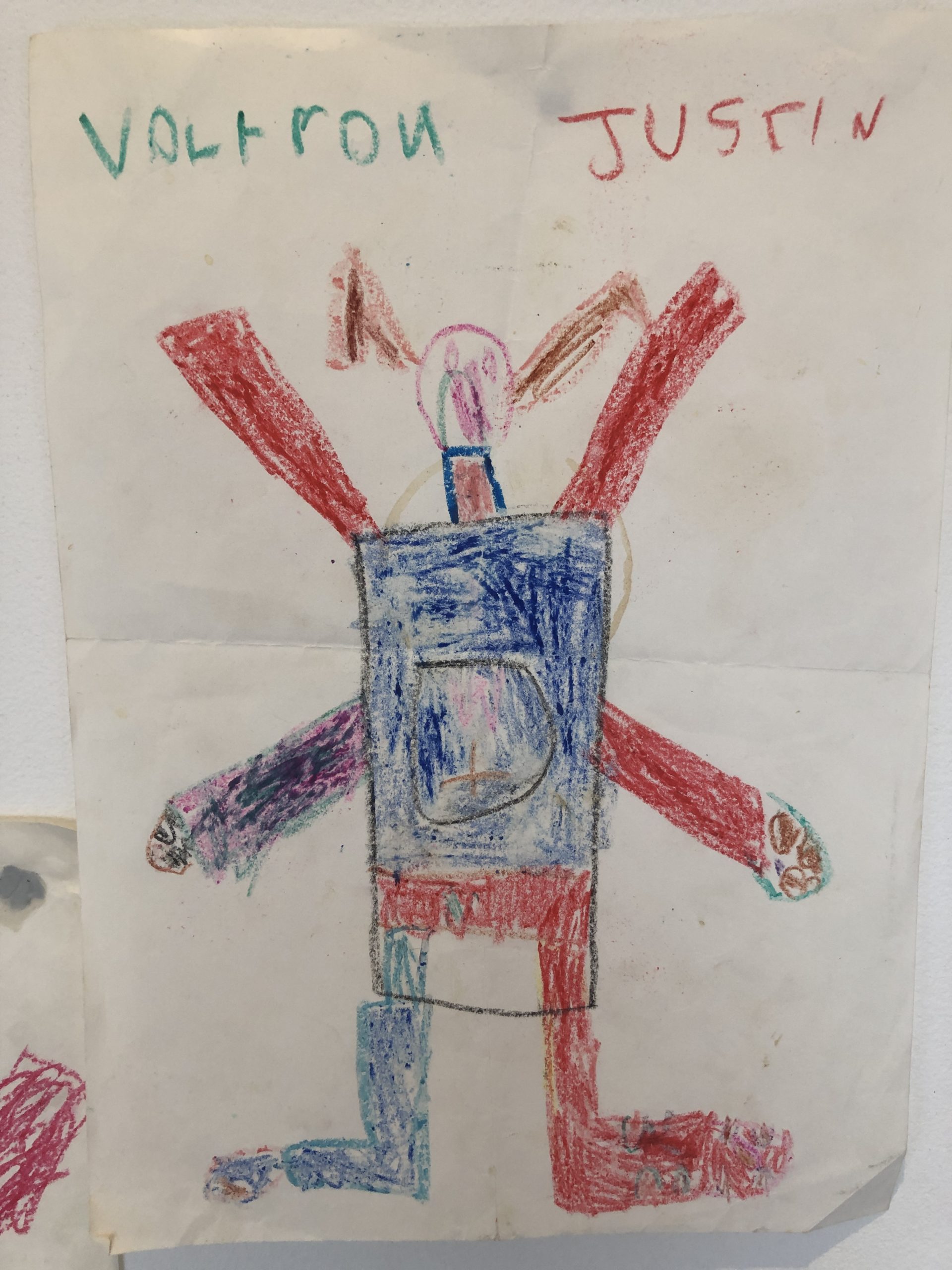 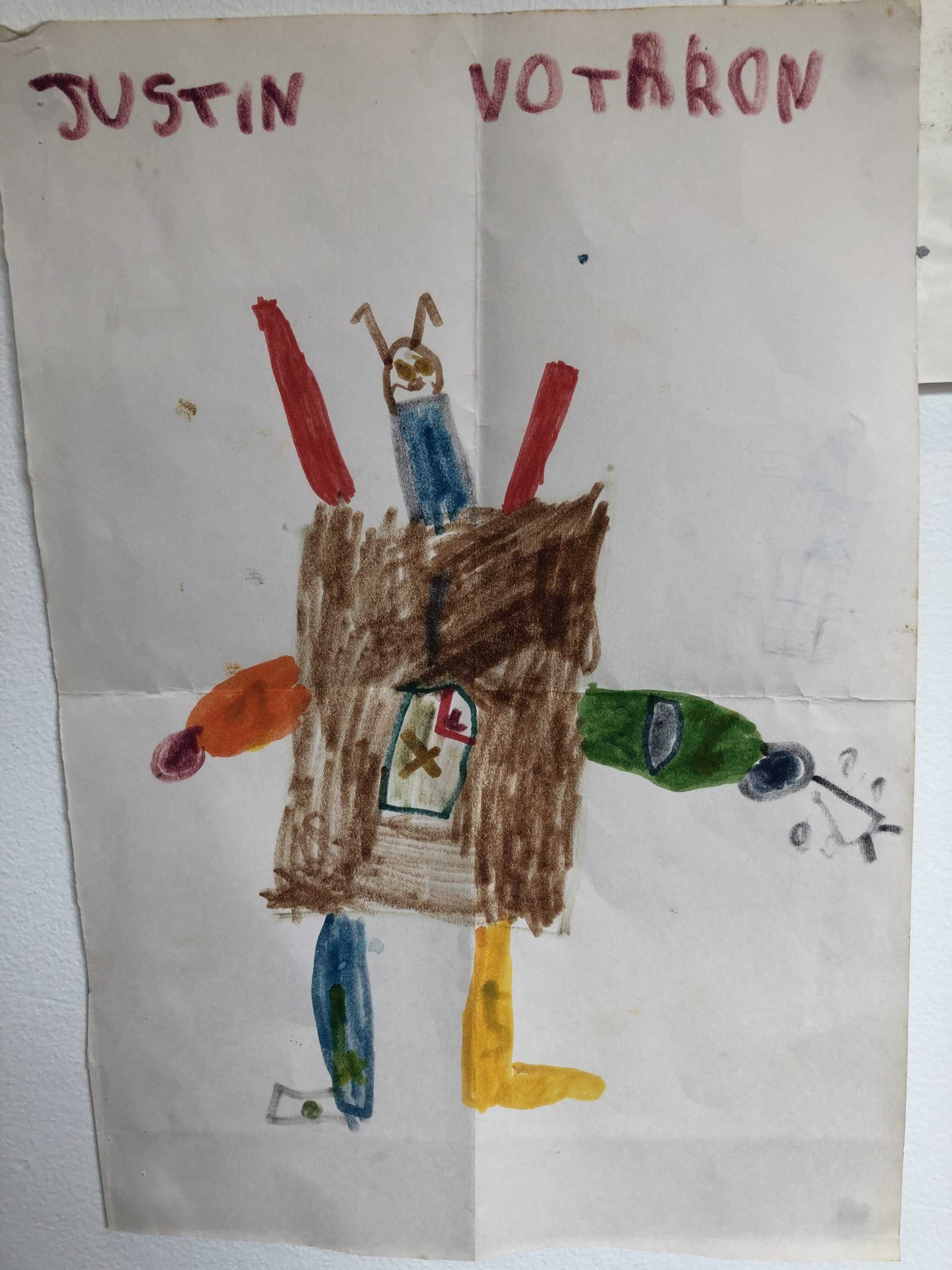 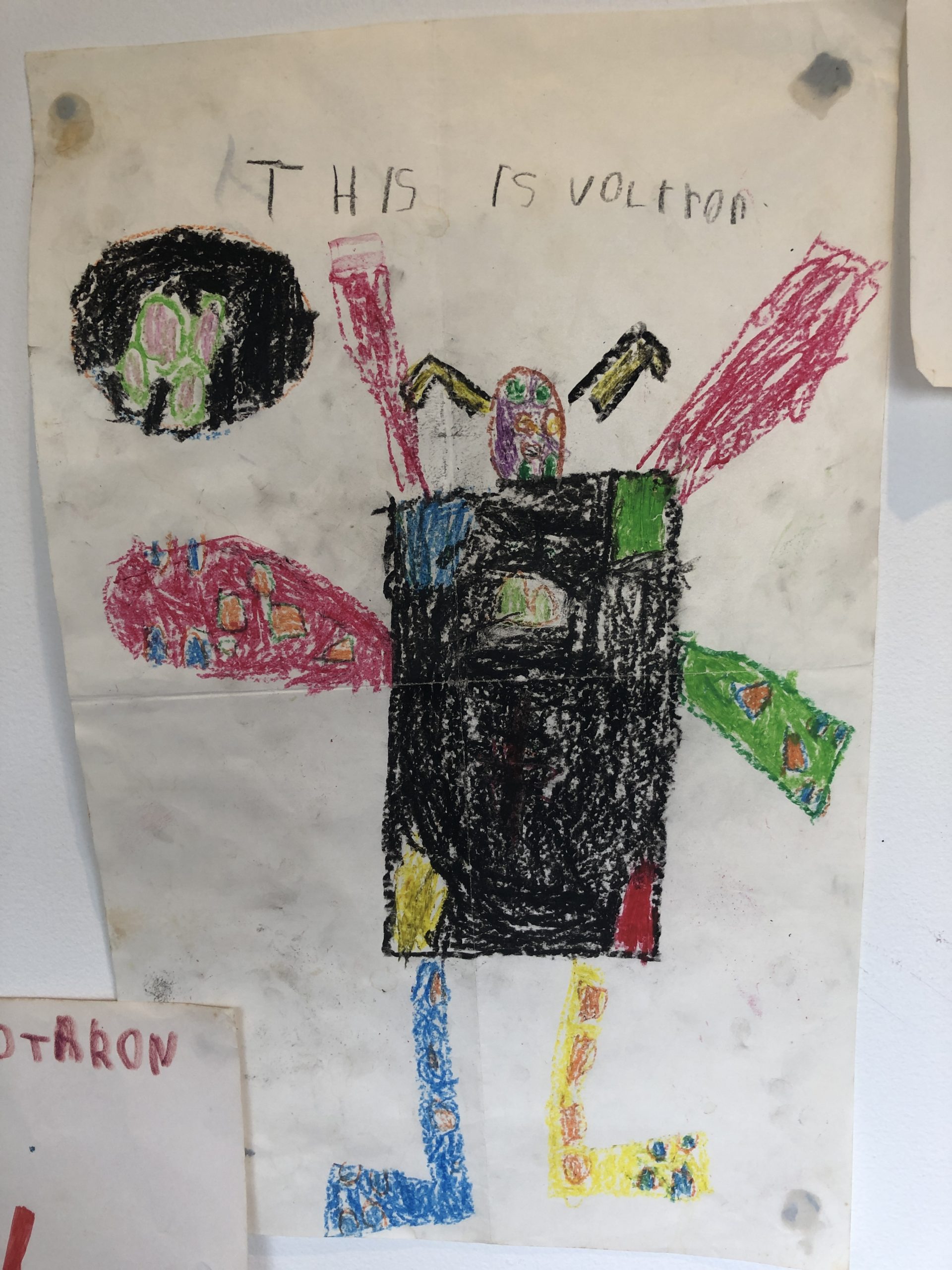 Mysterious Cities Of Gold (Esteban is actually on a quest to find his Dad! No wonder I was glued to it), The Red and the Blue and ‘That line guy.’

Occasionally after a Bedroom Philosopher gig a reserved, skinny man would sidle up and inform me “ah, that show, it’s actually called La Linea.”

Here’s to ‘The Line!’ (The one you can draw underneath the greatest era of children’s TV programming in the history of the universe).

“AND NOW HERE’S SOMETHING WE HOPE YOU REALLY LIKE!”

(Apologies in advance for the use of the term ‘mexican wave.’ I remember when I went to New York in 2010 and casually dropped that in. There was a ‘pause.’ We’re all trying to move on.) 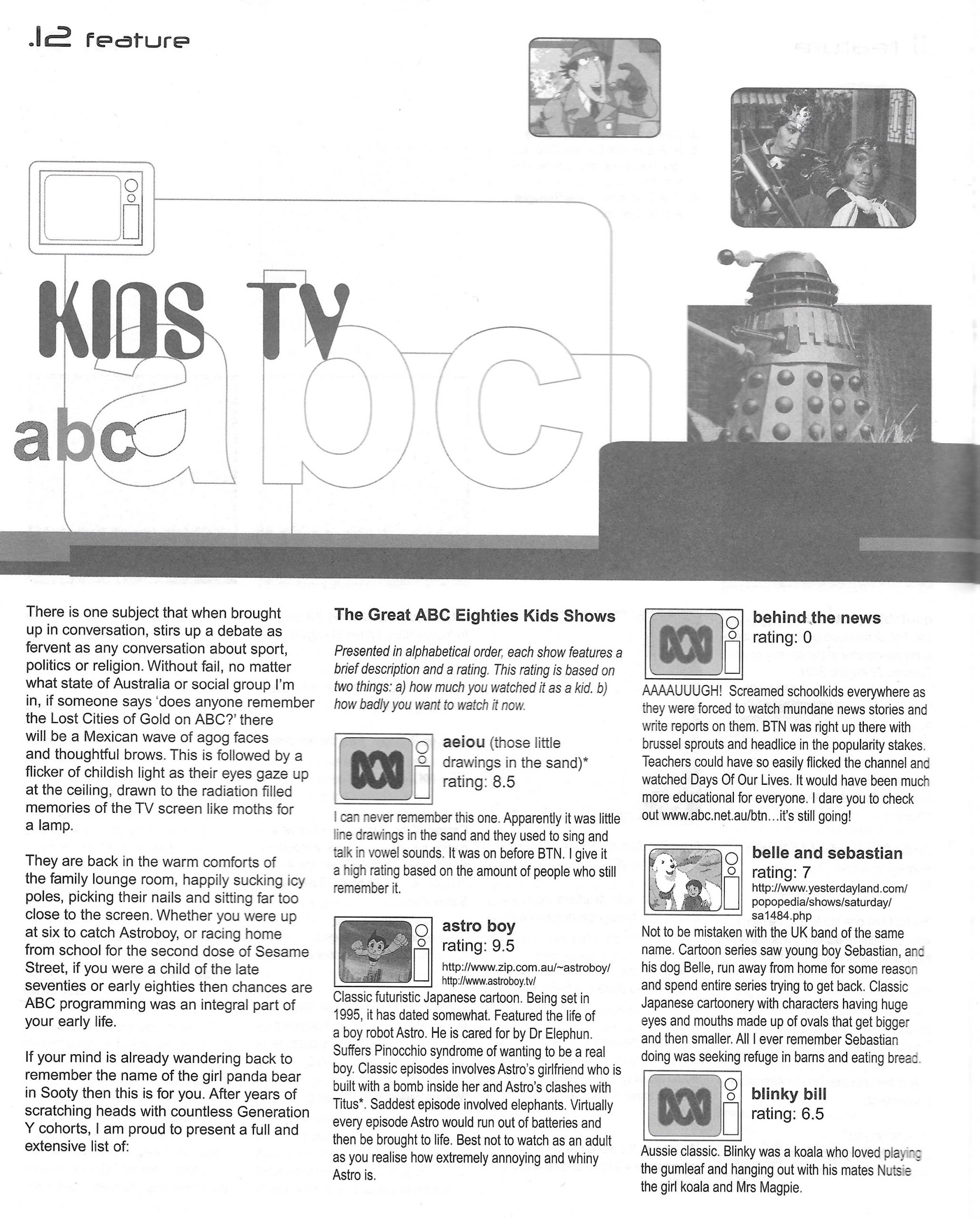 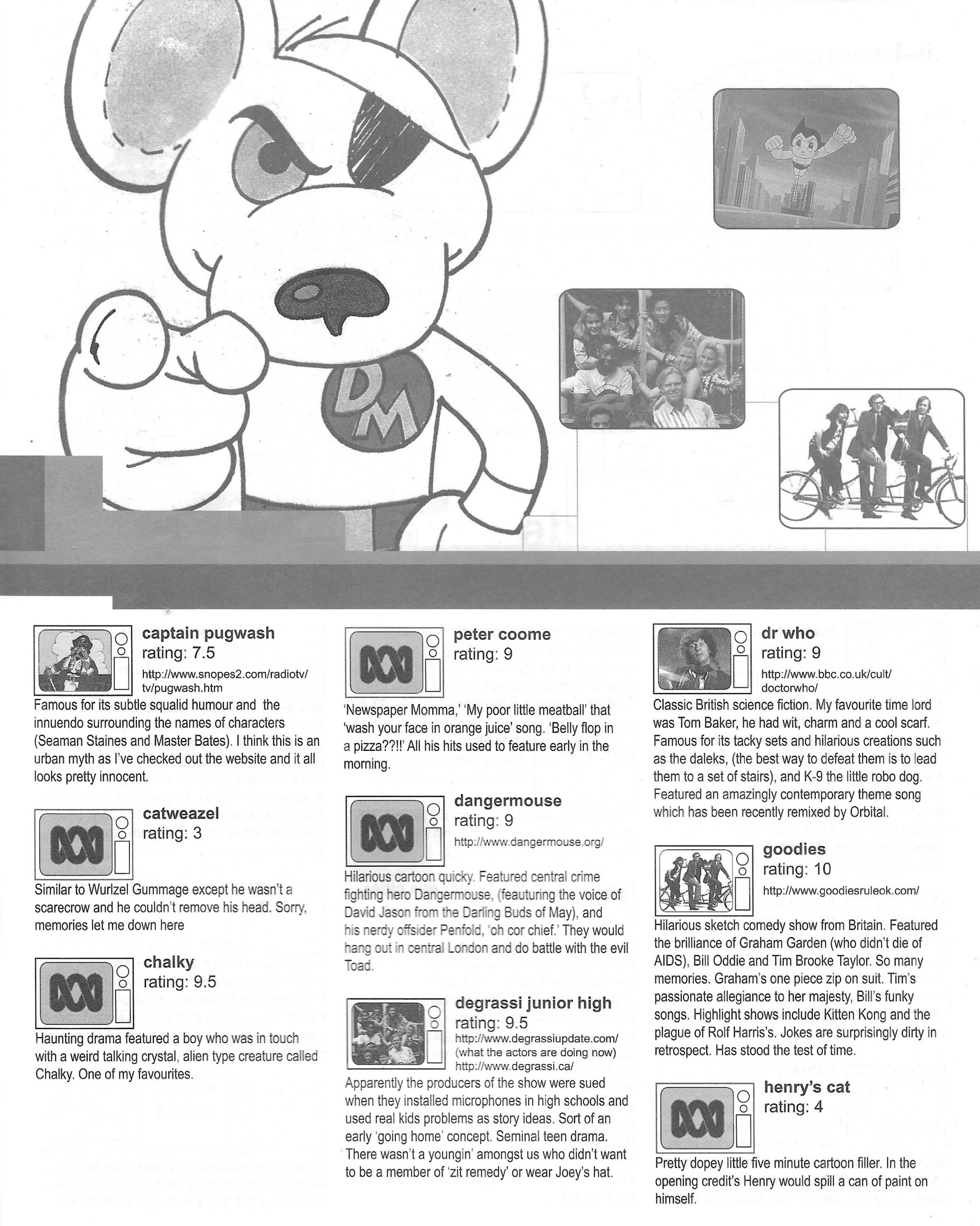 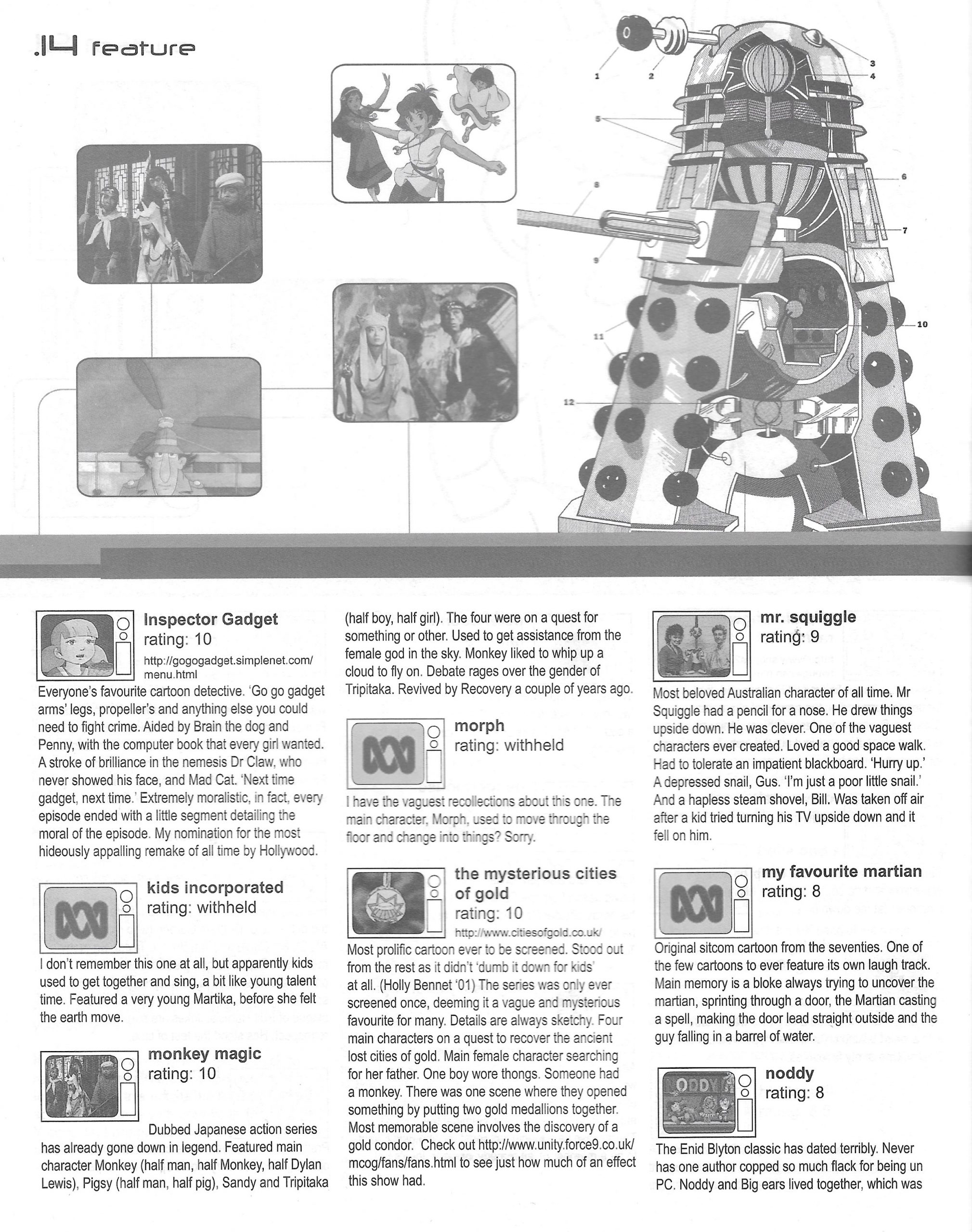 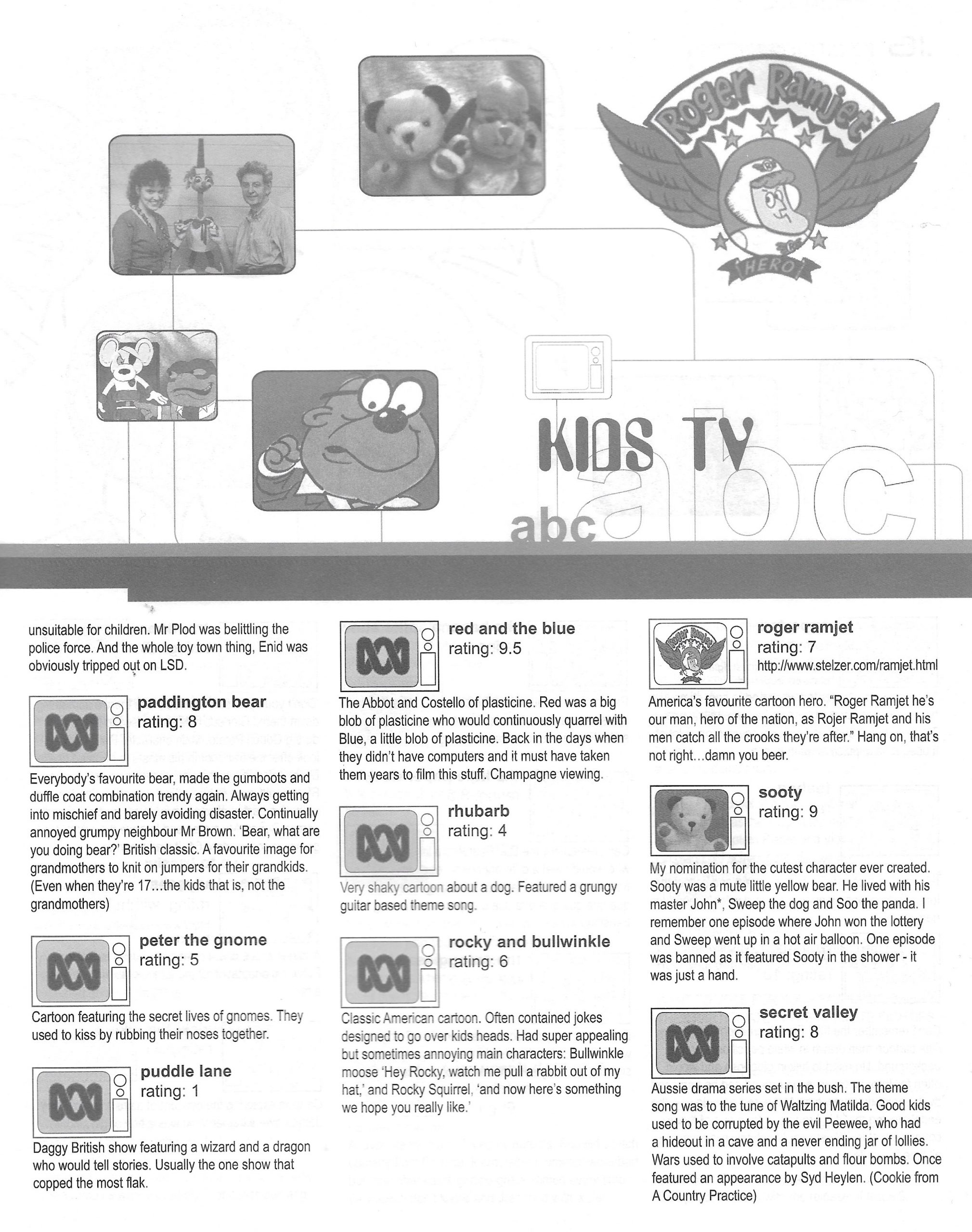 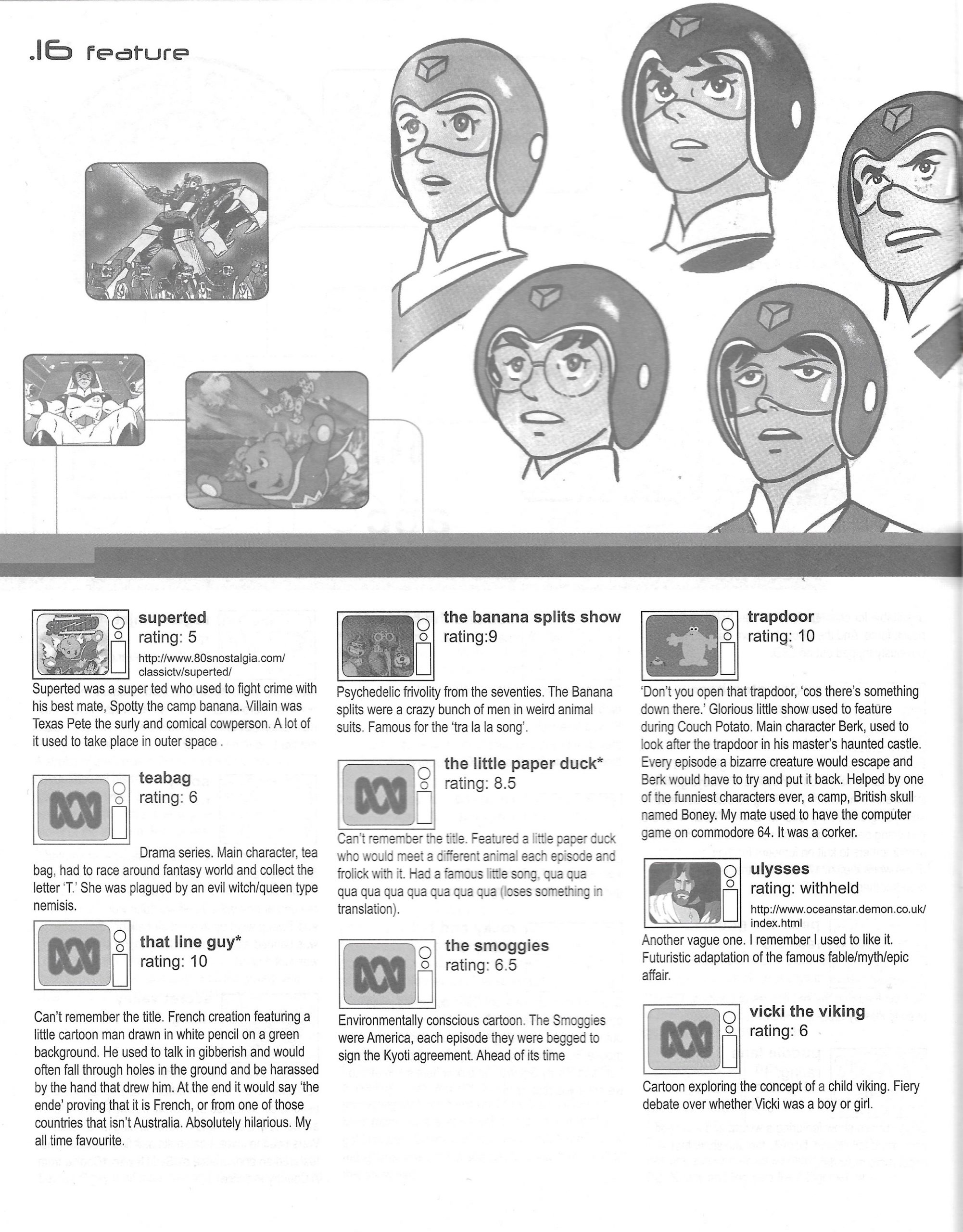 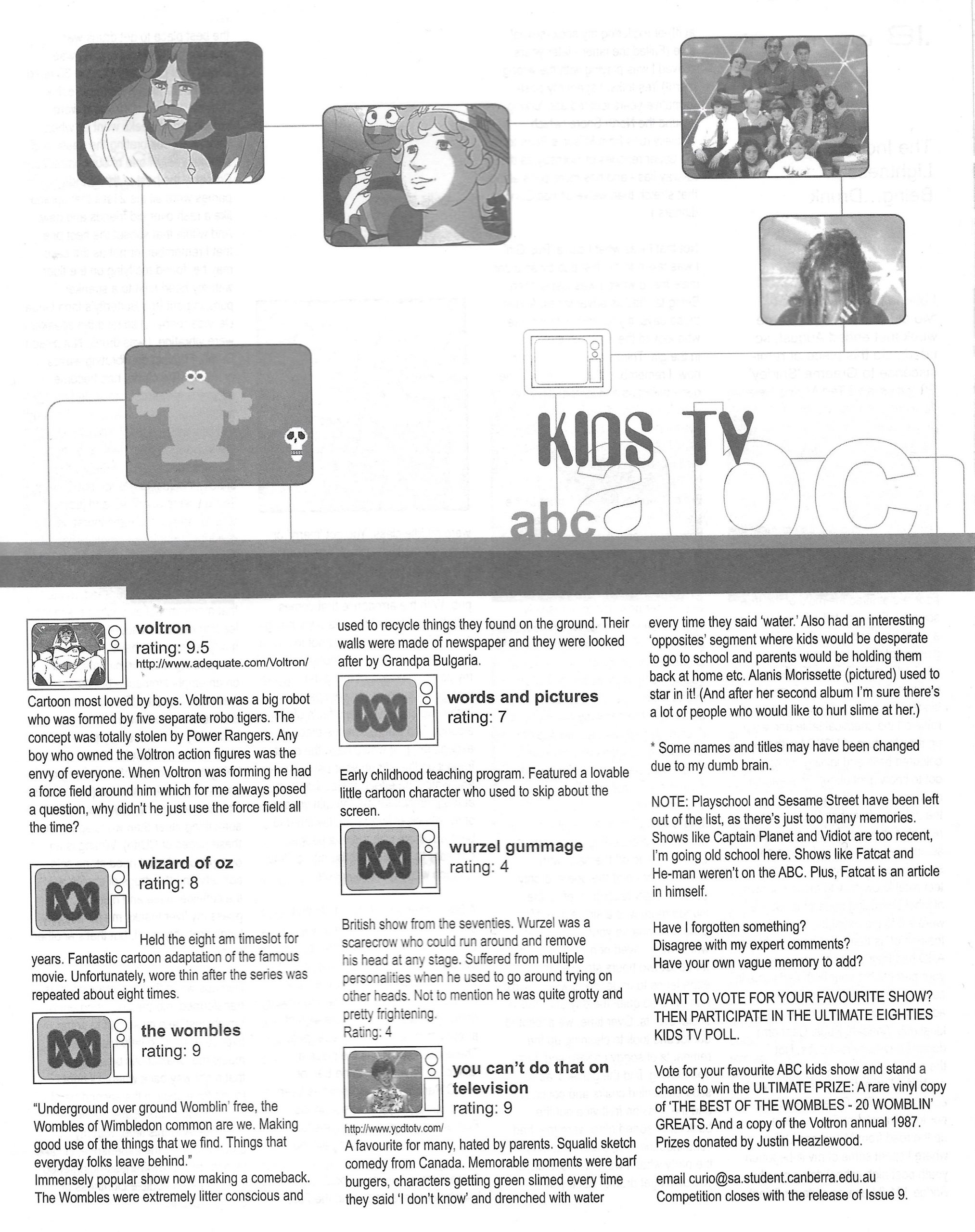 The piece was well received – but not without angry letters and amendements. This supplementary article appeared in the next issue: 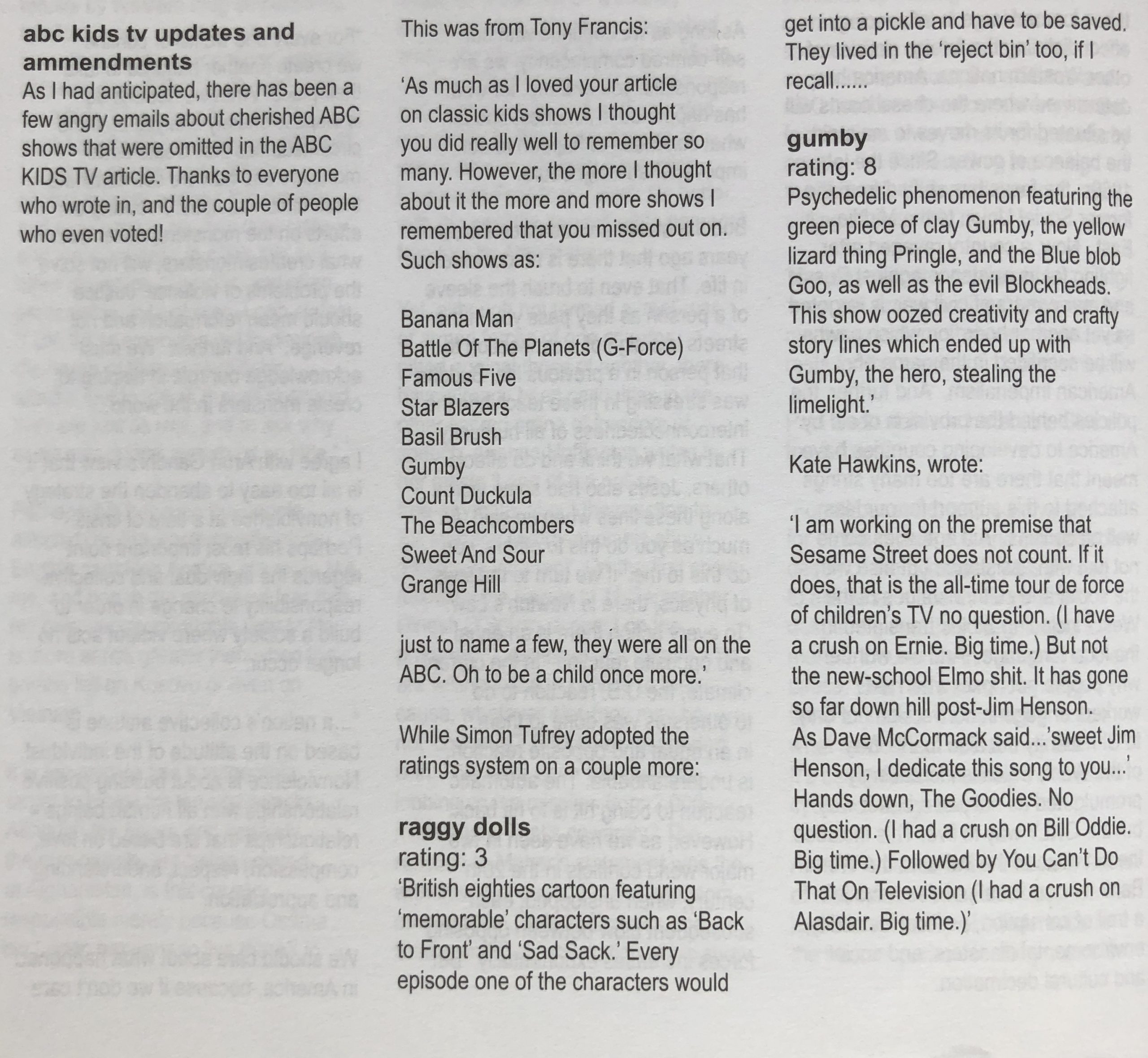 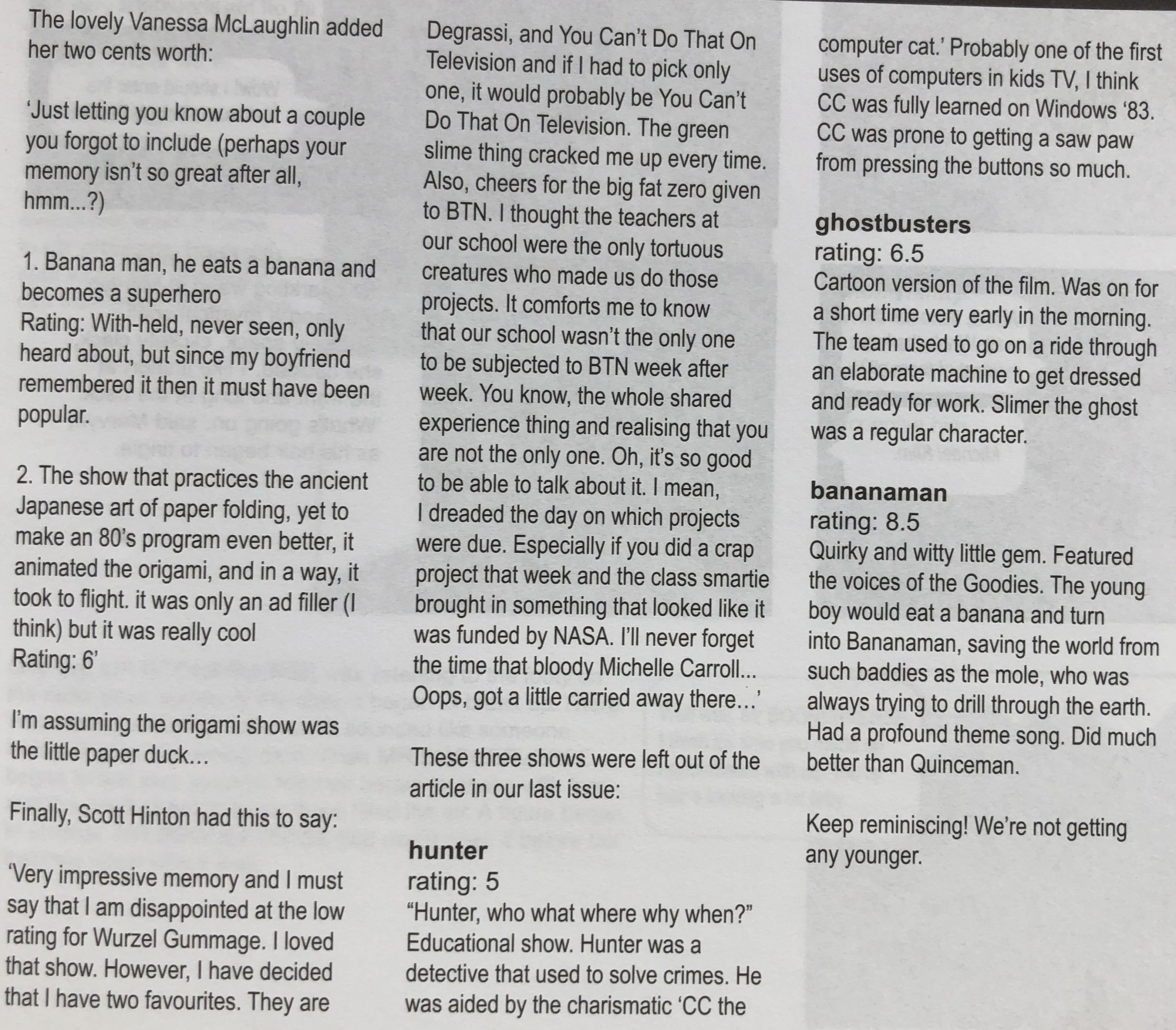 Since then, my life has taken me in dazzling directions – my own T-Bag style quest (or perhaps The Wonderful Wizard of Oz is a more fitting metaphor where Dot pulls back the curtain to find the wizard is some sketchy bloke running a small business), the manner of which allowed me to reach out to Peter Combe on myspace and pitch myself to be the perfect support act for his gloriously random comeback reunion tour of ’07.

Which song do you reckon I sent him as a reference? Actually, he really dug Golden Gaytime and said something along the lines of “very clever chords in the chorus, you don’t see the A minor coming.”

Ah, now I can retire.

Supporting Peter Combe at the Corner Hotel in Richmond infront of a 700 kidults electric with joy and kitted in newspaper hats and toffee apples is an easy career high and honestly – a taste of genuine Beatlemania for this Burnie nerd.

Not long after I formed a band with The Awkwardstra and we kicked Gen ABC up a notch!

GENERATION ABC single is now kicking on bandcamp. The music video will premiere on FB and YOUTUBE in the old Afternoon Show slot of 4:30pm today. WOWSERS!

LIVING ON THE EDGE…OF MY BED featuring Generation ABC will be released first on Bandcamp and then all streaming services from June 3. Check out more about the album here.