* I presented a story about op shops on ABC’s Collectors last Friday. Watch me walk towards the camera and talk at the SAME TIME here!

* The High School Assembly was a massive success! Thanks to all those who rocked up. Click HERE for a video of me busting out ‘We Are Tramily’ with special appearance by Raspberry Cordial’s J-Saf.

* There was a piece on the High School Assembly in the Sunday Age HERE.

* I was a guest on The Conversation Hour with John Safran & Lawrence Leung. You can listen HERE.

* I have a new single, new music video (Tram Inspector) and new website.

* The single is ‘Leaving My Hairdresser’ a song challenging stereotypes about male relationships, as I nurse a platonic boner for the new barber in my life. It features the Awkwardstra in full sonic regalia with Gordo swinging the electric guitar, Mad Dog Rabinovici punishing the drums and Nature Boy Hazel slinking about on bass. There’s some truthful falsetto, aided by new member Donny Maracas, and brass tact from Donald Trumpet and Audrey Horn breaking all kinds of sax-laws. ABC Darwin were the first the spin it and are known for their hit breaking, so I hope the story cheques out. I was doing a phone interview with them, and halfway through a rant when my phone started ringing! I was so confused. It had dropped out and they’d rung me back mid-conversation. To the person in the car next to me it just looked like I was pretending to do an interview.

* The music video is for Tram Inspector. It was made by the same team as Northcote including Craig Melville as director. It was a logistically perplexing clip, in which an authentic tram interior with functioning stripper pole had to be designed and built. I undertook rigorous dance rehearsals and pieced together the uniform by fraternising with the Melbourne Tram Conductor community. (The shorts had to be built). The role of the girl was wonderfully underplayed by Ratidzo Mambo. Thanks to the Vic Rocks music grant for letting me have some fireworks. 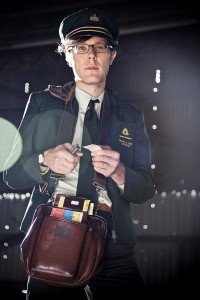 * My spiritual web home bedroomphilosopher.com has been upgraded from the hipster playschool design which served me admirably for eight years. With the vintage 2003 coding it was looking like a postage stamp on 27” screens. I’ve gone for an ‘obscure 1970’s French cartoon that used to be shown on the ABC’ vibe. It features some new sections such as Lyrics and a Shop.

* Wit-Bix has been run and won. Overall it was ‘good’ but exhausting. It was a big departure from 86 Tram, made up of half stand-up, including political stuff and an interpretive neo-sexual cat impression, but I feel for the most part audiences picked up what I put down. I performed in the Gala for the first time, which was most exciting.

* I read Jonathan Franzen’s Freedom. It gives Lolita a run as the best book ever.

* Congratulations to Josh Earl who gave birth to a son, Oliver. The world just became a better place to be.