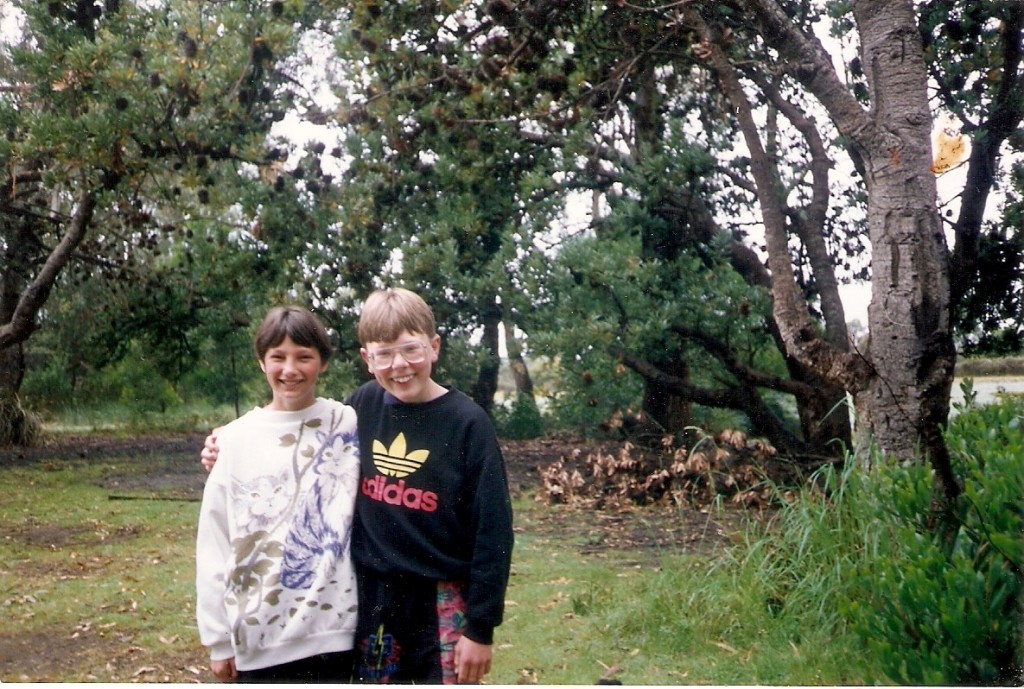 In grade 10, my girlfriend Kristen cheated on me with an older guy. When I say older, I mean he was on his P’s. I’d tried everything I could with her: a four-hour phone conversation when we lived half-an-hour away; some serious leg playing; I even let her boss me around and change her mind every five minutes about whether my school shoes were ‘yay’ or ‘nay’. She ate my chips, she finished my jokes, she left cryptic messages on my pencil case. Now I think about it, she was pretty annoying.

As an apology for cheating on me she blu-tacked the lyrics to Roxette’s ‘It Must Have Been Love’ to my locker. I was devastated. It wasn’t my locker. She’d been seeing eight other guys while we were together. The ‘youth group’ she’d taken me to was just a big second date.

Earlier, in grade six, I had been part of a girlfriend lottery scheme for four-eyed boys. I was placed next to Tennille. She was from New Zealand and had brown skin, blue eyes and a shy but funny demeanour. I was an egg with a bowl cut. We wrote letters to each other, sat next to each other at play-lunch, I think once we even spoke. Crunch time came during the school camp. It was night and we were wandering around the bush, high on Chomps. With childlike curiosity, and not-so-subtle urging from friends, we gravitated towards the back of the cabins; alone for the first time. We stood there staring at the moon-flecked wood pine for 10 minutes. Neither of us spoke. I didn’t breathe.

My brain had bungee-jumped into my heart, which was skydiving into my stomach, which had unravelled down my legs. I knew why we were there, but I also knew that it was impossible. She was so lovely and warm, and waiting patiently, and if I had just let my eyes close and my face drift forward, guiding it gently against hers – the softest snap-crackle-tickle could have been mine. I did not. Would not. Couldn’t. With twigs cracking like Pop Rocks, I led us back to our friends.

A few weeks later, Tennille said she didn’t want to keep being my girlfriend. This message was delivered by her friend, in a note, photocopied from a Magna Doodle. I went into denial, relying on a cocktail of Ovalteenies and Fruita to get by. Where had it gone wrong? I attributed it to the fact that the day before, Mum had come to pick us up in her little Yellow VW Beetle. The thing roared like Crazy Frog and looked like a Matchbox Pop Ball. Tennille didn’t look so rapt about being in the back seat. Yet the more I think about it, the more I come back to that night behind the cabins. I had revealed a crucial weakness of character. I had tucked my windcheater into my shorts.

My first real kiss wouldn’t come until four years later, when I started wearing contact lenses and girls realised I was all right in the face. I used to attend a regular Christian camp, which had such dangerous rope swings (not to mention ute-powered grass sledding) that it was in your best interests to have JC on side. Saturday nights were always pretty flirty and we’d guzzle our desserts down, watching girls from afar. Once, a love-struck couple got their braces stuck together and they had to call in the SES.

Through a series of whispers and trampoline dares, I’d paired up with Chantel, both of us shy and second-tier cool. We meandered up the gravel road and, under a clear night sky, I told my body that history wouldn’t repeat. It’s a shame it didn’t, because we bumped teeth. Several times. Even God had to look away. It lasted a couple of minutes, after which we slunk back in silence, too embarrassed to ever talk to each other again.

Twelve years on, not much has changed. Only now I bump hearts.