The Bedroom Philosopher – Living On The Edge…Of My Bed (2003) 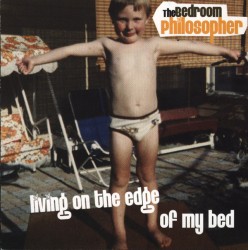 CD artwork shows incorrect track listing changed on purpose at the last minute by suggestion of then girlfriend. (The above listing is correct). Only 500 CD copies were ever produced, especially for my Melbourne Comedy Festival debut show (of the same name) in 2003. A box of 100 was lost in transit between Sydney and Melbourne and could be under a house at 45 Burke St, Blacktown where I was living with my nine year old cousin, her mother and grandmother.