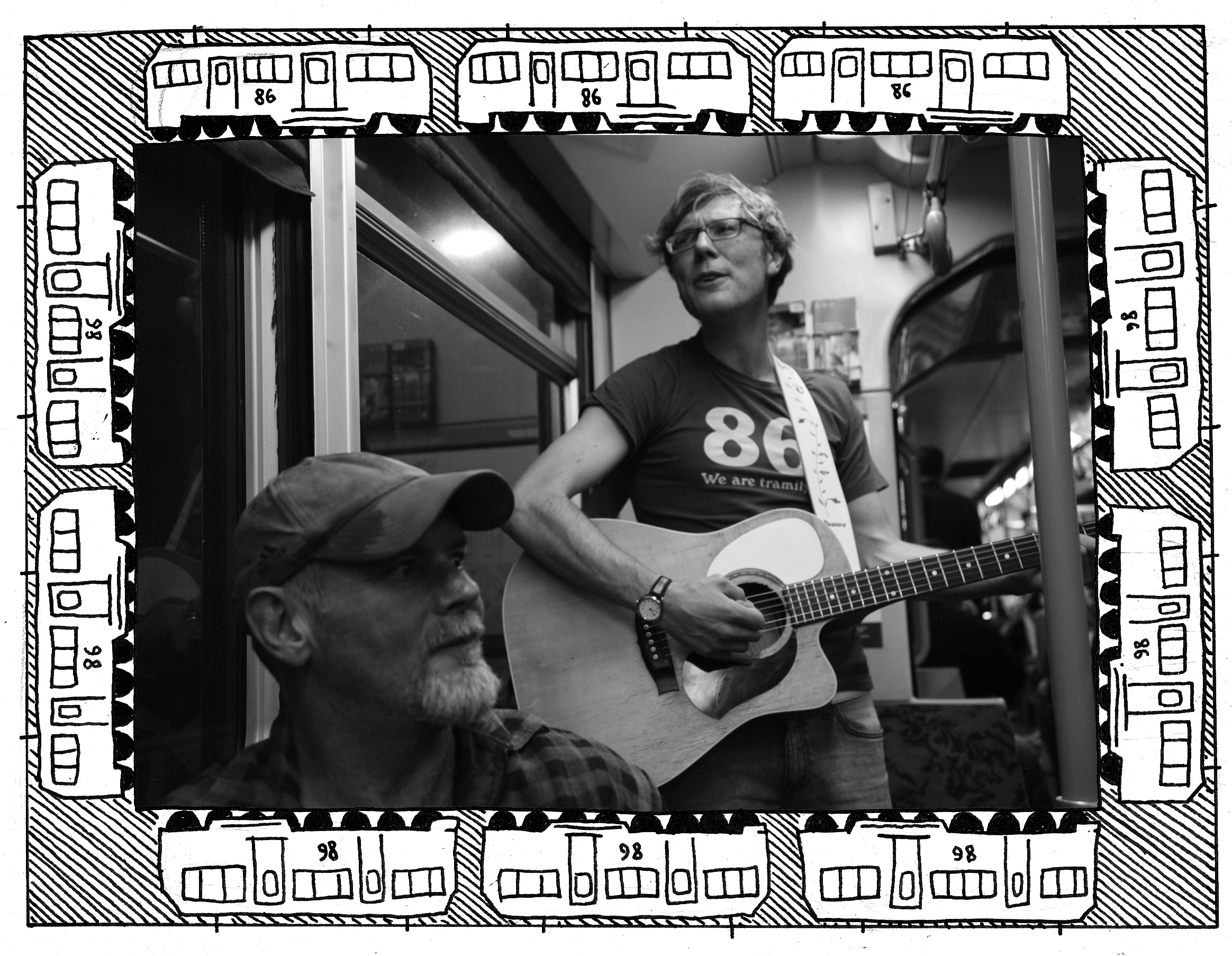 To mark the release of Trishine – Solo Version, we hark back to Buddy & Me from The Bedroom Philosopher Diaries – when a certain someone wandered onto the tram…

In November 2010 I was booked by Melbourne Music to perform some shows on the 86 tram (along with a certain Courtney Barnett!). This involved me straddling the gap between two seats, leaning against the back window for support while wearing a radio headset mic hooked up to a small amp. On two occasions I attempted to perform Songs From The 86 Tram in its entirety. The first time the tram rolled out from Docklands to Bundoora – the opposite direction to the album. It was suggested that I could have performed the songs backwards, (reverse order, not phonetically) which was a neat idea. On a blustery Thursday eve a medium coterie of fans turned out, scoring their weekly tickets well in advance. The 86 is a venue that doesn’t need a lot of people to look full.

I banged through the tunes, finding the subtler ones like Sudanese weren’t helped by the grumbling din. Tips for performing on a moving vehicle? Yoga really helps with your sense of balance and core strength when riding the bumps. By Bourke Street the tram was squashy from Friday night revellers, and feeling weird about the stares, I bailed on Trishine. Señor Tram Driver was still running the show, threatening to turn the thing around unless people cleared the backdoor. I tried to capture the moment by starting a sing-along along the lines of “please clear the backdoor” set to three chords. There’s nothing more vulnerable than walking off a tram you’ve just performed a hit and miss improvised song on while teenage punks diss you via the insta-parody “Please, get the fuck off the tram.”

For reasons unknown we had to alight at Brunswick St, cross the road and catch another tram back to Docklands. My headspace was incorrect at this juncture and I politely shutdown. This was guerrilla business. While we had some Melbourne Music staff with us, the plan was no more sophisticated than getting on a streetcar, finding a space between two seats and making a gig happen. For someone who is fussy about having a backstage and affording a sound check, this renegade experiment was like making up a bed in an elevator (at gunpoint.)

In a wonderfully crap freak accident of hilarity, I managed to get my puff-jacket zip caught on the high-E string of my guitar. The string had threaded itself within the teeth mechanism, so the two were completely entwined. There are moments in life when one searches for instructions on how to act; whether this be heavenwards from a maker, or deep within oneself – wisdom hidden like money inside books. This was one such moment. I stood there, head down, attached to my guitar, a friendly passenger working on the string, Melbourne Music staff waiting for me to begin my assigned duties, acutely aware that whence normally some form of instinct or instruction filled my consciousness, now there was only the soft hiss of a blipless radar. I wandered through my bewilderness to a point of submissively maniacal death-mirth. Tonight was offering me a half-cup of ingredients toward a breakdown.

What did I do? As coolsies watched on with half interest I made attempt number three to prize the awful metal fuselages apart. After telling my chest ‘I can’t handle this,’ I removed the offending string completely, which ate up a further five minutes of my life like a charcoal faced digital cherub. Ruing the bruises to my rep. I thrust into New Media, the muscle-strum cleaving through the banality like a passionate pendulum. Then came Northcote, In My Day (Nan) and Old Man At End. For non guitar players, not having the high-E string is like not missing your little finger until it’s removed. I went to do a scissor kick and hit my head on the handle. The pitter patter of applause was soft rain on my caravan. At the end of the performance, the staff asked if I wanted to share a taxi with them back to the city.
“Oh no,” I said, looking around. “I’ll just get the tram.”

I doused my post-gig analytical brain with the milk of human kindness sourced from cute-eyed questions. For what it was, it was perfect – for something else, it was a bit shit – therein lies the flawed logic of comparison and the psyche’s hourly battle to evaluate the status of one’s life and determine whether one deserves any tangible relief from the childhood smear of self-loathing and emotional fallout from daily grievances. I’d given that tram a big ol’ sonic scrapheap and it had kept me safe like a silent robot.

The following Monday we organised for Yarra Trams to let us to make one continuous journey over the hour, removing the awkward stopover. Tonight I was primed and organised. There would be only rock star brilliance and world class comedian riding the line between genius and knob. None of that emo waffle. I locked in, buckled down, fired up and folked out. It was, as they say in the industry, all good mate.

Things got real as the tram began its violent left turn from Gertrude into Smith Street. I had just started Tram Inspector, puffing my chest up like a captain of intrigue, when a wry, (chicken) salt of the earth character rocked up in blue checked shirt and cap. Looking weathered and ready for most things, he plonked down in front of me with his back to the stage, effortlessly harbouring the spotlight. A few times he turned around to sum up my predicament, seeming reticent about the evening’s entertainment (and my asexual advances), yet nursing a wild glint in his eye. 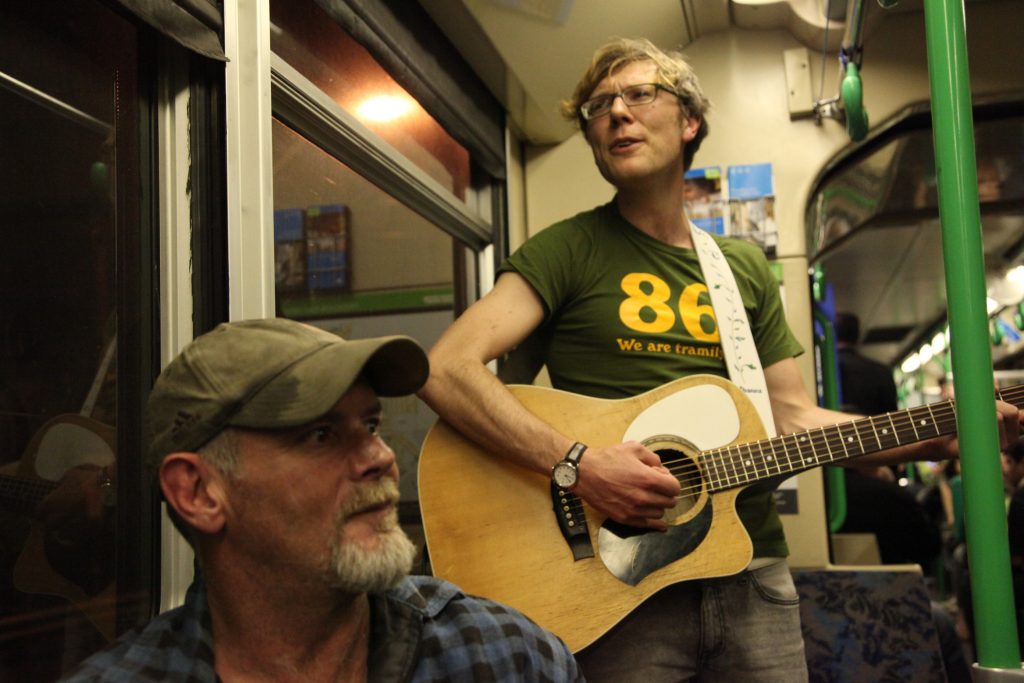 As my boyish giggles rippled through my droll funk veneer, some in the crowd were also shaking, fingers over their mouths like draw-bridges. This juxtaposition of skinny retrosexual and bogile unit was too much. During Tram Inspector’s outro, at my happiest, I declared “Old mate solo.”

Hardest thing about performing on a tram? Making eye contact with your audience, normally masked by the lights. My pupils roamed like ladybirds.

Next up was the spoken word of Man On A Tram. My new friend sprang to life, fishing his wallet from his pocket and showing me a Medicare card. Analysing my code of ethics, I was cautious to engage him. I fixed my gaze to the middle distance and finished the tune. Throwing caution to the air conditioning, I beamed.

“Hello sir just letting you know I’m doing some life-changing musical comedy for you tonight.”
He had his wallet out again. Holding up his I.D. as if I were a bouncer.
“That’s me name, Buddy.”
He’d picked up on my ‘old mate’ quip and was setting the record straight.
“Oh right, okay, Buddy. Do you have any requests?”
A bloke who’d been filming chipped in to ask him if he could sign a release form.
“Sure, as long as it’s not going on Crime Stoppers,” he grinned.
“Well, you’ll soon be wanted for stealing attention from this gig.” I returned, mock icily.

While some in the crowd (including my manager) were wary of the dynamic, (knowing my temper and the fact I can snap any man), my Bogar, developed from a lifetime in Burnie confirmed the situation. Buddy was a good egg.

I continued on, suffering headset problems and subsequently throwing a ‘tramtrum’. I flung the infernal gadget onto the cushion and tried to belt out In My day a cappella, which is like trying to sing an opera through a didgeridoo. Precious micrograms of gig momentum escaping from the rupture in my mood, I whipped the headset back on and tried New Media, but sensing exhausted levels of commitment, I aborted all. At this moment two things occurred to me:
While I’d performed the album in order thus far, I’d forgotten to play Trishine.
Buddy was about to get off the tram.

To my delight, Buddy sat back down, propped himself against the window and had his first real chuckle of the night.

Words can get fucked, they can’t explain my love for you / Feelings and shit and that and yeah nah and so forth / My heart’s been kicked out of bounds on the full.

The ballad sailed over its namesake chorus.
Oh Trishine / I’m the ute and you’re the diesel

Buddy’s face changed from a smile to a wistful gaze, as he went somewhere deep in his mind.

Unbeknownst to me, he reached his arm into his shirt and removed a piece of sticky white paper. It was his nicotine patch. As the song neared its finish, he stood up in a daze and headed toward the doors. I sped up, keen to preserve the poetic harmony of the moment. Buddy looked at me, his blue eyes swimming in the neon light, and like a tree in a hurry to grow, raised a hand to wave and stepped into the night.

I had finished my hour’s performance and stood, heart pounding. The cameraman came up to me for an interview and assured me that he had gotten the entire incident on video.

“That was him,” I told the camera, blood and time crawling “That was the Trishine guy!”

In a Beat interview I’d joked at the idea of the corresponding characters getting on the tram like a live film clip, but I couldn’t have foreseen anything so poignant. For those few minutes, art and life had combined, parody sitting comfortably next to tribute as the moons of satire and society slipping beneath each other, creating a humour eclipse more graceful than blinding. The 86 had sent a representative, on behalf of the people I had dwelled within for these past two years – a spirit guide with grey goatee and jeans – a solid father figure to acknowledge my daydream dedication.

I felt more blessed than I did during ten years of religion.

TRISHINE – SOLO VERSION IS OUT NOW ON NAN & POP RECORDS. THE BEDROOM PHILOSOPHER DIARIES EBOOK IS AVAILABLE IN THE SHOP.