In 2005 author pal Liam Pieper (fellow Voiceworks edcommer) was sent my album In Bed With My Doona to review for Beat. No doubt inspired by John Safran’s Music Jamboree, he took editorial sensitivity to fabulously dangerous levels by not only running the review by me first, but offering me the chance to write it myself (under his name). This post is in tribute to the legendary generosity of this heat-seeking media rapscallion.

ME: I guess I shouldn’t rave about it too much – or they might figure you are my mate or something. Dunno. But would like to try it.

LIAM: Don’t worry about going overboard, I’ll edit down any overboard self-sychophancy. A good trick is to rave about the album, then bag out one track, then praise the singles.

The review ran. Life went on.

THE BEDROOM PHILOSOPHER- IN BED WITH MY DOONA 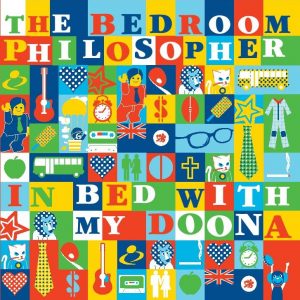 The Bedroom Philosopher (aka Justin Heazlewood), made his debut on Triple J’s morning show. There, he churned out a doona-full of quirky acoustic vignettes – showcasing an ability to sound like a pre-sexual man-geek yet muster images both goon-guzzlingly Australian and spine-gigglingly surreal. In Bed With My Doona, his debut studio album is an ambitious comedic experiment that self-proclaims to be: ‘The Seargent Pepper’s of Indie-Folk comedy.’ Amazingly, it’s not that far off the mark.

‘Love Theme From Centrelink’ is a lush, breezy showcase of the record’s sublime production quality, while ‘Megan The Vegan’ is a perfect folk-punk tribute to anyone who’s ever lived in a sharehouse dictatorship. Folkstar is the unexpected hit of the album, featuring sleepy, witty rapping over a trip-hop acoustic dub sample At times, The Bedroom Philosopher seems to possess’ the musical innovativeness and lyrical smarts of early Beck, creating a uniquely amusing sound.

While a couple of basic ‘ha-ha guitar’ tracks possibly nudge the disposable side, the appropriately heart-wrenching ‘Heart Song’ reminds you that The Bedroom Philosopher not only possesses a truly inspired comic edge, but also understands the dynamics of an beautiful pop song. Current single, ‘I’m So Postmodern’ is one of the funniest of all songs of all time – an effortlessly random, relentlessly clever opus that plays backwards on itself to reveal subliminal messages about a TV doctor’s smock. In Bed With My Doona is an unabashedly original, landmark debut. It has enough moments of earnest, playful genius, to deem it an important entity in both Australia’s comedy and musical landscapes.