I’m writing this as I read my own handwriting which says ‘Reading the same line over and over.’ Now I’m wondering about you (the reader) reading this while I write it. So, I’m writing an article about reading which will be largely concerned with the fact I no longer read the way I used to while pondering whether you’re really reading my writing or perhaps just skimming. Are my thoughts being thrown down a screen, or are your eyes vaulting the monitor like a lizard on lily pads as you dash with desire to waste as little possible time gleaning Profundus Maximus.

Reading the same line over and over.

It’s been the third time now. I’ve written the same line three times. Yikes. If you’re not laughing you’re crying. If you’re not reading you’re writing. I can’t read my own writing. Not that it isn’t good, I just mean I have the handwriting of a twelve-year-old doctor. That said, I did just write my own childhood memoir about being twelve, and doctored it along the way with help from an editor. The editor read my writing and I read the editor’s report. Being a writer means being a reader, right? So, the last book I read was my own, okay? I read it about a hundred times, probably. But each time I read it, the words changed. It was an interactive script. It was like the Marauder’s Map in Harry Potter. My words were restless, like children on a page.

My child was all grown up.

I was always a good reader. In fact, I was the best reader. I remember this clearly. I remember being so smart that my favourite library teacher Mrs Svenson had to make up extra comprehension tests. They came on cards, like the catalogue ones. The idea was to develop the skill of ‘skimming for information’. Something like this. All I know is that Mrs Svenson was a cool teacher and oh so rapt with me. ‘Justin, have you finished already!’ She couldn’t keep up. I was hungry. I wanted to devour. I needed to solve. I adored coming first.

In grade two I’d finish reading early, whipping the books like unicorns. They’d fly off and I’d need something to do. My teachers (Connie and Sheila) asked me to help the others. The slower kids. Help them with their reading. Sure, I thought. I’ll do that! I was raring to be asked. I was thrilled to be leader. I felt kind inside, flexing my patience as I sat with the problem boys in their faded windcheaters and warts on their knuckles—taking them on a guided tour around the page.

Ever since Grover screamed at me not to turn the page in The Monster At The End Of This Book I had the sneaking suspicion that there was always an invisible, shimmering gateway where the quiet paper characters and beating heart humans could connect. Sprinkle story dust in my mind and I’ll make the colours dance.

All the great books of my childhood:

Space Demons, where the boys go inside a computer game.

Adrian Mole, where he measures his penis. 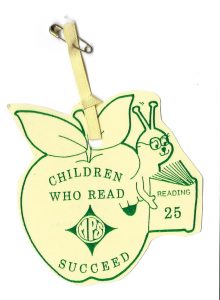 As a teenager I moved onto Point books. Christopher Pike, RL Stine—page-turning horror. Then Fighting Fantasy (Dungeons & Dragons for only children). In grade twelve I studied literature. We were given books to read like Cat’s Eye. Famously, I got away without reading it. It seemed too serious and dull. I was a boy. I liked books, but on my terms. I’ve never much cared for being told what to imagine.

That said, the last book I read was given to me by my filmmaker friend, Thomas Hyland. It stood out as the first book I’d been given by a boy outside a birthday. He was filming my book launch for Funemployed (my book about being an artist). He handed me Letters To A Young Poet and said, ‘I think you’ll like this. It’s an artist writing to another artist all about being an artist. Oh, and solitude.’

What was he saying? That I was some misfit loner who might appreciate notes on being alone by some long-dead French misfit loner? Probably. Maybe not. It doesn’t matter. The fact is I didn’t read it, but the truth is I read half of it.

Outside of Jonathan Franzen and Dave Eggers novels (my heroes) and the David Foster Wallace collection (essays so dense your mind feels like it’s on the receiving end of a trilogy), Letters To A Young Poet was the first book I’d half-read in some time.

See, apart from my own books and newspapers and zines, I don’t read much anymore. I just don’t have the concentration span for it. Somewhere along the line it felt unsafe to suddenly jump into someone else’s universe. My gaze was a busted zipper, slipping along the teeth.

Yeah, it’s a mental health issue. My chemistry retracted. I got into an INFJ staring competition with myself. I needed to let my mind off the leash and float around the star-base of my inner sphere for a while. I was like the Voltron lions going inside their forcefield while they formed the legendary defender. The last few years have not been a time for multitasking. Books felt out of reach.

So, I’m not a great book club member. I’ll bring the kombucha, but I can’t break down The Handmaid’s Tale. Boys are slower readers than girls. (I reckon.)

Toni: Is that Burroughs and the Drug Culture? I love that book.

Super Hans: Me too. I’ve been reading it for like a year. I’m on the bit where Kerouac finishes his Benzedrine high, looks back at his novel and realises that he wasn’t even holding a pen. Course Ginsberg’s over in the corner laughing, but also crying at the same time.

I’ve read 1984 and Lolita though, so I’m not an idiot. I remember beautiful writing. I know what it’s like to be swept away by the superfine stratosphere of a master’s meter. Gimme that sweet assonance and the metaphors from hell. The short, sharp stabs and the long, loping landscapes. Less is more. More is more. There are no rules! Do what you want but make those characters bleed and breathe and dream and breakdance and breakdown and undersell and unravel till we understand what it is to be overwhelmed.

But I’m on a spiritual sojourn.

A sabbatical of sorts.

My mind is so full.

I need all my thoughts.

That’s why I was particularly enamoured with Letters To A Young Poet. It was a short book comprising of a series of letters. It came to me at a time that I was the most isolated I’ll ever be. It struck me as the only manual I’d ever absorb that not only acknowledged the value of solitude but actively championed it. You’re shitting me! In this time and place where the word ‘recluse’ is used with one context and one connotation only; someone, albeit French and living in 190-something, was able to write about a lifestyle that I can totally relate to.

‘The first step is the simple recognition that solitude exists. A lack of connection to other people, after all, is not something we are normally eager to seek, acknowledge or welcome…’

‘We are solitary. It is possible to deceive yourself and act as it were not the case…How much better…to take it as our starting-point.’

(The start of my OK Cupid profile.)

‘Works of art are infinitely solitary and nothing is less likely to reach them than criticism. Only love can grasp them and hold them and do them justice.’

Mate, I’ve been saying that for years.

‘You are so young, all still lies ahead of you, and I should like to ask you, as best I can, dear Sir, to be patient towards all that is unresolved in your heart and to try to live the questions themselves like locked rooms, like books written in a foreign tongue. Do not now strive to uncover answers: they cannot be given [to] you because you have not been able to live them. And what matters is to live everything. Live the questions for now. Perhaps then you will gradually, without noticing it, live your way into the answer, one distant day in the future.’ 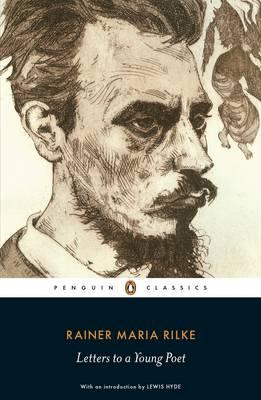 Now you’re speaking my language! (Even though it was originally in French.)

Some kind of gently passionate dissemination of the heartache of being a soul-searching introvert in a world obsessed with social media’s wishing well of yells. I wanted that thing that books seem to deliver best. Universal, timeless truths. Shot like sweet green arrows through my hard-headed resolve. I could soften a little, safe in the knowledge that someone, somewhere, sometime, got into the same crazy puzzle I did. They didn’t fight, they sat quietly, and did some wonderful writing.

Reading the same line over and over

over and over, if it’s good enough.

‘Everything has been said before, but since nobody listens we have to keep going back and beginning all over again.’ Some bloke.

I read this book and I remembered it for you, dear reader. It’s good to remember what you’ve read. Even if it’s just the gist of the mist. There’s a car chase at the end. The narrator’s a ghost.

My book, Get Up Mum, has been released. It’s being read as we speak.

It’s left a sea-shaped space in the desert of my mind.

But butterflies are returning after heavy rains.

Hopefully next time I’m asked I can give you a full report.

Gwendolen: I never travel without my diary. One should always have something sensational to read on the train.

—The Importance of Being Earnest, Oscar Wilde 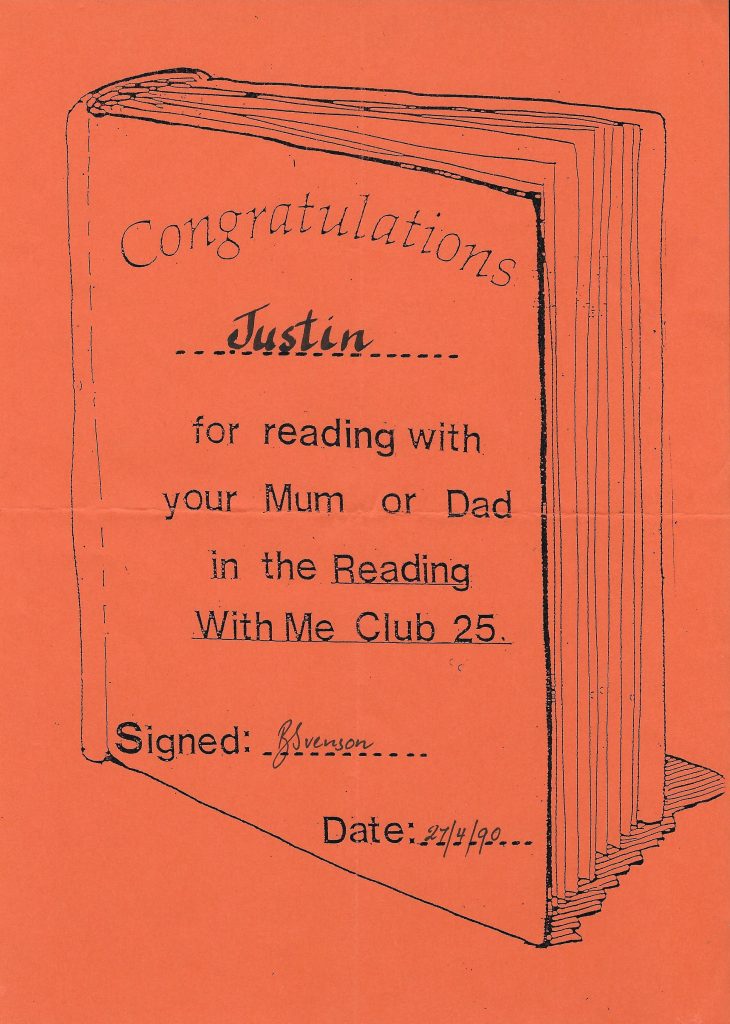