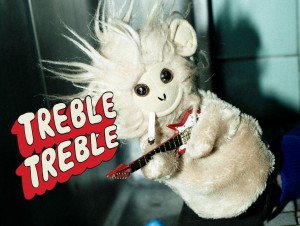 My first memory of music is listening to Popcorn by Hot Butter. I’m standing beside Nan and Pop’s ‘Stereo Sonic’ entertainment deck with black sponge headphones wrapped around my noggin. I load a cassette into the deck and press down on the chunky metallic button. The oceanic tape hiss fills with a sci-fi whine, followed by a warbly synth waddle of baroque alien ducks and the novelty combustion of a robotic, whistle-ready melody. 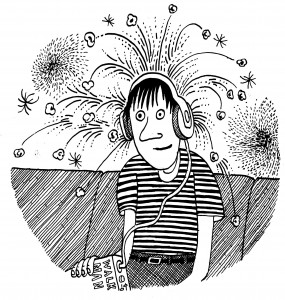 I sit mesmerised, staring at a yellow and brown swirl print cushion. These sounds are colour to a blind man. An aurora to a caveman. A Christmas and birthday imagination sandwich. Cerebral sorcery that fits like a tshirt and springs like a trampoline. Music was shaking hands and asking to be my friend.

The song continues, the pad chord bed hitting the profound F#m. The vibrations enter my ears like molten fireworks then vapourise, leaving puffs of awe. Popcorn, at once silly and profound, is a Moog minstrel with a weeping heart. The jaunty lead tickles my chin while the broody rhythm of the bridge places a steady hand on my chest. The song is trying to tell me something.

At 1:08, something incredible occurs. The carriage of the song slips off its rails and sails into the air, gliding on a glitteringly gorgeous magic carpet of harpsichord and arpeggiated minor chords. The chords are broken down to their base notes and knitted back together to form a musical spine which flexes and flickers, like the tail of an electric dragon. The sonic flux swings and snakes, mirroring the waves and mountain tops of a stereo equaliser. The luck dragon cycles its way through the dazzling axis of my mind. Lava coated flowers burn red, blue then yellow. My LCD creature zips and darts, spelling mathematical shapes before exploding into rainbows and lightning rods.

After this uplifting bridge the song breaks down into the tribal simplicity of tom drum and tambourine. An anxious two-note timer synth creeps in, adding a sense of urgency. Each layer of instrumentation is cleared, leaving only the ticking of a laser clock, soon blotted out by the squelch of Martian flatulence. It is at once comical and menacing. The sound of a spaceman being obliterated in a Commodore 64 game.

I take off the headphones and gaze at the rows of tapes and photo frames, my head slowly morphing back into shape like ear plug foam. What is this “music?” This kaleidoscope of sounds. I am caught hook, line and syncopation.

My second memory of music is listening to ‘I just called to say I love you’ by Stevie Wonder. For this six year old, the song is trumped by the micro-single which opens the tape. The ‘XDR Test Toneburst’ that sits at the beginning of cassette albums from the era. An audio distress flare sounding out the basic spectrum of tones from sub bass to high treble. An arpeggiated sonic treat for my brain to decode.

The song plays. I am drawn to the warmth of the synths, blending sweetly with the early 80’s compression and Wonders rich voice. Listening back, I detect lightly arpeggiated notes in the mix, adding a mystical, tinkling ambience – crystal rain on glass. The song has a lightweight of melancholy I am drawn to, and while my emotional palette is primitive, my synaesthesiac instincts associate the thick pad of the minor chords with a quiet internal warmth, as my heart increases the blood flow around my body, sending a rainstorm of thoughtfulness to my tummy.

Being a child of the 80’s, it’s little wonder my earliest memories of music are mostly synthesiser based. A glance at the children’s programming of the time shows cult classics such as Ulysses and Mysterious Cities of Gold using the kind of synth-heavy soundtracks that Gary Numan could take back to his laser pyramid. I recently rewatched Mysterious Cities of Gold and found to my delight that not only had the animation aged gracefully, but the soundtrack was a full bodied tremolo dreamscape.

One of my first cinema memories was the opening credits to The NeverEnding Story, featuring the title track playing while the camera tracked over dreamy clouds. While the single already contained brilliant melodic structure and a rousing chorus, my brain was excited by the arpeggiated bed, sublimely oscillating in the background like robo piano roll. Coupled with the epic adventure of the film, The NeverEnding Story made me want to melt from happiness and sadness all at once. Add the prettiness of the childlike empress, the savagery of the wolf and ARTAX! and you have an original sex and death soundtrack with training wheels.

A few years later, in 1990, I would accidentally bump into the greatest arpeggiated synth sequence of all time. The song was called Infinity by the UK artist Guru Josh. The song revolved around a melody played on saxophone utilising a stirring F-C-G chord sequence similar to that found in Manic Street Preachers ‘If You Tolerate This’, Live’s ‘Lightning Crashes’ and Scatman John’s ‘Scatman’.

Behind the sax are heavenly orchestral pad synths punctuated by a subtle oscillation of notes, brilliantly complimenting the chord sequence but not yet fanning all the hues to its peacock tail. It’s an ambitiously anthemic and acutely ambient opening, especially when listened to through earnest young ears.

The verses comprise of Guru Josh staking audacious claim to the entire decade “1990’s – time for the guru” backed by some industrial Terminator-esque effects and scattershot house beats. A looming three note bass line keeps the track in check while Guru Josh scats some ‘oohs’ and ‘aahs’ landing somewhere between Max Headroom, Kraftwerk and David Koresh.

At the two minute mark of the extended mix we are treated to a twenty second burst of what I have, for most of my life, accepted to be the greatest section of music ever recorded. The chorus chords are reprised with an arpeggiated lead running brightly over the top. The stirring ambience of angelic electro wash, flush with a dramatic major to minor chord change are punctuated with a constellation of digital train tracks whose rise and fall evoke the exotic quasars of my spatial awareness. It’s like a squadron of effervescent sprites line my kinetic pathways, waving brilliant sonic pom poms as I run a victory lap around my swirling fantasia – the music shining a neon blacklight on the dream bursts of my mind’s eye – a cross between the last rainbow level in Mario Kart, the time travel scene from 2001: A Space Odyssey and a Flaming Lips concert.

The reverb on the mix evokes an underwater dream – the audio equivalent of bubbles bursting as they rush to the surface. It is not dissimilar to Caribou’s ‘Sun’ at the 3:40 mark, from a house album he wanted to sound organically underwater. ‘Infinity’ creates a magic speedway inside my imagination where natural and synthetic are one. Circuits become veins and stars turn to pixels. I am the king of colours – flying through a psychedelic utopia, smelling the freshness and licking tears from my lips.

For a period of my teenage years, this song was my drug. I would slip on the earphones, press play on my walkman and escape. I lived for the arpeggiated section, and thankfully, after an astoundingly lengthy (2:05!) piano solo, ‘Infinity’ offers a sixty second outro of the enchanting sequence, spiralling skywards before dipping and dissipating into a mushroom cloud of ambience.

I was finding my own non-druggy relationship between electronic dance music and hallucinating. During car trips, I’d disappear into deep trances, triggering the stained glass screensaver of my mind. In Year Ten I fully explored this concept with a short film I wrote called ‘Infinity.’ The story revolved around a D.J. who believed that if you took the live speaker wires and inserted them directly into the brain, while high on a certain drug, you could physically transform and “become the song.” (It was not long after ‘Lawnmower Man’ where the protagonist became pure energy via virtual reality). In the final scene two investigators burst into the DJ’s compound (bed-sit) to find he has been successful with his experiment. On his bed burns the infinity symbol, rendered in blue flames.

What I was expressing was my deep desire to completely connect with electronic songs like Popcorn, The NeverEnding Story and Infinity. I wanted to trip as hard as I could, powered by my imagination and a box of Nerds. Like in the book Gillian Rubenstein’s ‘Space Demons’ where the characters are trapped inside a video game, I wanted to be sucked inside these songs – able to fly along the sonic dimension they existed within. I could hear and see music, I wanted to be able to touch, taste and smell it as well. I don’t think many other people my age wanted to smell anything to do with Guru Josh. He had a goatee and always looked sweaty. (I later discovered he fell out of favour after publicly supporting Thatcherism).

My love of arpeggiated synths continues to this day, and I’ve been drawn to it in recent alt-rock tracks such as Grandaddy’s ‘The Crystal Lake’, Wilco’s ‘Heavy Metal Drummer’ and the music of Ratatat. I’ve used it on one of my own songs ‘For The Love I Have For You’, to moderate success, but have resisted the urge to buy my own keyboard. I fear that once I find the arpeggiation settings and put on the cans, I’ll swim down a sonic wormhole of no return.