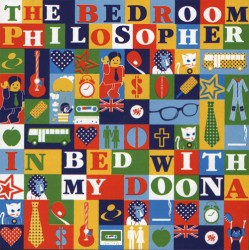 The first 100 copies contain Track 16 Special Features which is a live track recorded at Mic in Hand comedy night, Friend in Hand Hotel, Sydney September 2004. 100 copies featuring special coloured barcode (made up of my mobile number at the time) but no live track were produced for Tripod tour of regional W.A. 2005.

Folkstar has has had three different incarnations. In the original pressing of 100 I am speaking the vocals. In the next 500 I am rapping the vocals but without the presence of double bass (Pooglet 78″ Mix) in the current rendition I am rapping with double bass (Pooglet With Strings Mix). The latest version of In Bed With My Doona also features a remixed version of Heart Song and updated lyrics in McRock. (I wasn’t convinced that Sick Puppies were still relevant so I updated it to End Of Fashion. Naturally, since then Sick Puppies have made a comeback and are probably more popular than End Of Fashion. Ah, the joys of committing pop culture commentary to disc.)

You’re So Vague was removed from several CD versions of album due to me freaking out that I might get sued for parodying Carly Simon’s You’re So Vain without seeking permission. (This would so not have happened and I blame my legal-aid friend in Hobart for putting the fear into me). The track is restored on all digital versions.